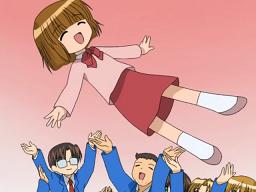 Mika-sensei is loved by her students
Mika-sensei, what are you doing getting stuck in the middle of all the first-years?
Advertisement:

Doki Doki School Hours (known as Sensei no Ojikan, meaning "Teacher's Time," in Japan) is a manga by Tamami Momose, which ran from 1997 to 2013 in Manga Life. The series depicts the adventures of 27-year old Suzuki Mika, homeroom teacher of class 2A of Okitsu High School. Because of her diminutive size she often feels overwhelmed by the antics of her students. They form quite an eccentric bunch: we have our fashion-victim, an otaku, a lesbian student with a crush on her teacher, a narcissistic crossdresser and a gay guy obsessing over a classmate who doesn't have a clue and only thinks of sports.

To make things worse, Mika is often quite ditzy herself, so she is not always on top of things. The fact that she still lives with her parents and is spoiled terribly by her father doesn't help much either. Still, the students love her and hold her in high esteem, so things manage to work out most of the time.

The manga has an anime adaptation produced by JC Staff, which was broadcast in 2004. The story starts out with typical high school fare, like festivals, sports events and the ever-dreaded "measuring day". Later on there is a change of pace, leading to a series of genre spoofs vaguely reminiscent of Excel Saga, only to have things become very serious again by the last episode. The mood and animation style of the anime are very loose and cartoonish and seems to have been influenced by Azumanga Daioh quite a bit, even though the manga it is based on actually pre-dates Azumanga Daioh by a few years. Doki Doki School Hours is highly recommended for viewers who love bizarre characters and dry humour interpersed with some genuinely touching moments.