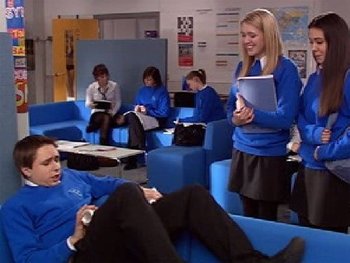 Meanwhile, in the 6th form common room...
Lots of girls and lots of boys
Lots of smells and lots of noise
Playing football in the park
Kicking Pushbikes after dark
Baggy trousers, dirty shirt
Pulling hair and eating dirt
Teacher comes to break it up
Back of the head with a plastic cup.
"Baggy Trousers", Madness
Advertisement:

Comprehensive schools, now generally just called "secondary schools", were set up in the 1960s by the Wilson government, replacing the old system of Grammars and Secondary Moderns (where you went and a lot of your future depended on the dreaded 11 plus exams — a system that still prevails in Northern Ireland and some English counties — and a variation of which can be seen in the Harry Potter books and movies).

School buildings in the UK widely vary in age, from Victorian era to brand new. On TV, many are Victorian. Fortunately, the days of the outside toilets and outside swimming pools are gone. In some cases the "outside" has gone too, having been sold off to property developers or used to build a new block to replace the prefab hut classrooms.

British school pupils in almost all cases are required to wear school uniforms, and you can spot a troublemaker from a mile off by the fact that he or she isn't wearing it properly - skirt too short, tie askew, shirt not tucked in, top button undone, wearing trainers, etc. It is of note that in some schools, not wearing one's uniform correctly has encroached en masse, to the extent that very few pupils bother to wear the entire uniform correctly. Uniform generally consists of a white shirt, tie, dark bottoms (trousers or skirts), smart dark shoes and, quite often, a blazer.

The troublemakers also like to smoke behind the bike sheds, which is usually also where teenage romances take place (presumably, the smoke obscures the romance). These days smoking in the Staff Room is illegal, so pupils and teachers both disappear behind the bike sheds where they carefully ignore each other.

Kids in glasses are generally portrayed as "swots", as are "prim and proper young ladies" (e.g., Hermione Granger from Harry Potter). The former get bullied, the latter may turn out to be Beautiful All Along.

Gangs are common, both of the good ("let's have a jape") and bad ("let's nick the smart kid's dinner money") variety, although most schools now have electronic payment for school dinners, so it's more "steal their dinner card/finger print". Kids in TV schools display a far greater degree of coordination on their own than one ever saw in real life. The teachers have to be called "Miss" or "Sir" (a policy that only actually happens in some schools) and are generally highly strict. Whatever you do, don't annoy the Head Teacher.

They used to be able to administer a caning, but this was stopped in the 1980s; many a media commentator has called for its return. Highly popular for the expected hijinks the students (and also often teachers) will get up to, because really, they shouldn't get up to them. Such shows are naturally prone to Dawson Casting.

There are a wide range of differences between English and Scottish schools, but none of them are relevant to the trope, except that uniforms seem to be more optional.

Interestingly, written partly as a reaction to 'Another Brick in the Wall'. The slightly younger, working class members of Madness didn't entirely relate to that image of school— their own education had been slightly more relaxed, and they were aware that the teachers were making do as best they could with their situation as much as the children.