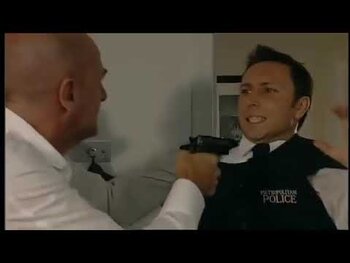 The average British bobby does not carry a gun, except in Northern Ireland and certain parts of Nottingham and London. Only about 7% of coppers are licensed to use firearms.

This means that when they encounter a criminal who does have a gun (which may either be a replica gun or real), they are often in rather serious trouble, because a stab vest (body armour designed to stop knife attacks) cannot stop bullets.

In most cases, the coppers know that there are likely to be guns involved and will send the Armed Response Units (police officers complete with Bulletproof Vests, helmets and Heckler and Koch MP5 submachine guns) in first. However, sometimes they get it wrong and a gun ends up being produced.

The copper ends up with a villain pointing a gun at them. The situation can go many ways from here:

The latter has four outcomes:

Such situations, fortunately, happen far more often in fiction than in real life.