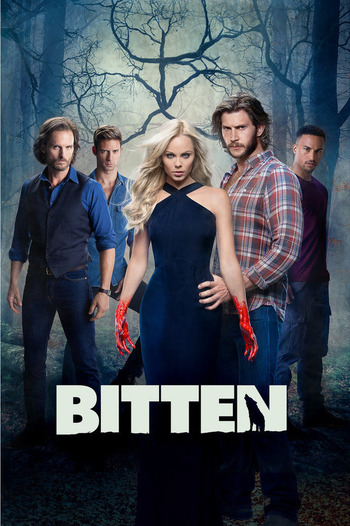 Bitten is a 2014 Canadian television series based on The Otherworld series of books by author Kelley Armstrong; the show is named after the first book. The majority of the filming for the series is done in Toronto, Canada. The series premiered on January 11, 2014, and was broadcast on Space Channel in Canada and Syfy in the United States.

The series stars Laura Vandervoort, of Smallville and Series/V2009 fame, as Elena Michaels, the world's only female werewolf. Elena is living in Toronto, trying to enjoy a "normal" life, only to find herself called back to Bear Valley by her pack. The packs are the ruling power of the werewolves and are being challenged by a rogue member of their species killing people on their doorstep. Elena must decide whether to stay with her family or try to continue living her normal life, all the while dealing with an increasingly difficult situation.

The second season premiered in February of 2015 and was loosely based on Stolen, the second book in the series. The third and final season aired from February 12, 2016 to April 15, 2016.

Spoilers for seasons one and two are unmarked.