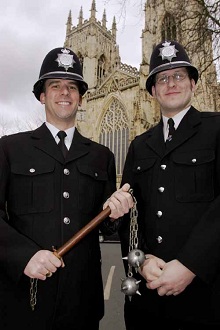 Don't let the silly hats fool you, folks.
"'Ello, 'ello 'ello. Wot's all this then!"
Advertisement:

The British police forces, since there's not one national one, are the oldest such organised ones in the world. Officially they are now "police services" rather than "forces".

The first modern police force was London Town's Metropolitan Police was founded by Sir Robert Peel in 1829. Peel has the Met's training centre at Hendon (featured in Hot Fuzz) named after him and his name is the source of two of the British English terms for police officers. These are the now-defunct "peelers" (except in Northern Ireland, where it is still used) and the slightly less defunct "bobbies".

The boys and girls in black

The British police are known for their distinctive helmets. Pictured above, they are properly called 'custodian helmets'. They are good for, among other things, covering up a naked man's offensive bits and give rise to the derogatory term "tithead". These are worn by male constables and sergeants on foot patrol. Other male officers wear a peaked cap, while women wear a bowler hat. Some services (including Scotland's) have replaced the custodian helmet altogether, but they are still seen on ceremonial occasions such as Remembrance Day parades.

The classic blue serge uniforms of old, being classic fanservice if worn by a female, have also gone from everyday use. Nowadays, police uniforms are black. Until the 2000s, officers wore a white shirt with a black tie (a clip-on tie, otherwise the officer can be grabbed by it) with women wearing either the tie or a black/white chequered cravat. Senior officers continue to wear white shirts and ties/cravats, but most forces have moved the rank-and-file officers to wearing black t-shirts with a stab vest. Officers who are out on the beat will very often wear a yellow hi-vis jacket over this.

Another widespread symbol of policing is 'Sillitoe tartan' - a pattern of black and white chequers. The pattern appears on the hatbands and sometimes other places on an officer's uniform, as well as other police-related places such as logos and decorations. It is named after a former police chief who introduced it in Glasgow in the 1930s to make officers easily identifiable. The Sillitoe tartan also inspired the police car 'Battenberg' livery, with square panels of hi-vis blue and yellow.

British uniformed police use the following ranks, in rising order of authority/seniority:

Officers of these ranks are informally called the 'chief officers', though only the commissioners and chief constables are actual chiefs of a police force.

Plain-clothes detectives (from the 'Criminal Investigation Department', or CID) use a similar system, but with different connotations in fiction:

Note that unlike American police forces, these ranks avoid sharing the names of military ranks (apart from Sergeant). This dates to when Peel named the ranks in the Metropolitan Police, and he wanted to console people's fears that they would be a paramilitary.

In decades past, female police officers had "W" prepended to their rank, e.g. WPC Annie Cartwright (Life On Mars). This is no longer the case, although the media doesn't always get the hint.

The British bobby (male or female) and their CID partners have had several stereotypes over the years:

An interesting side note is that while there is a perception that officers who graduate from uniform to CID detective have undergone a 'promotion', this is not strictly true - becoming a detective is a specialisation, not a promotion. Uniform officers actually have greater powers in the United Kingdom in the sense that police have to be wearing uniform to use certain powers (e.g. making a traffic stop). The person in charge of the cells will be a uniform officer (normally a sergeant), while the detectives go about collecting evidence and interviewing suspects. This is a marked difference to the American style of policing: in the UK, a move from uniform Constable to Detective Constable is more of a sideways step than any kind of promotion, while the American model sees "earning your detective badge" as being a step up. Still, the perception persists that detectives are somehow "better" than uniform because the responsibilities of their work are usually more varied, and they are seen as exercising their brains while their uniform counterparts are seen as the dumb muscle.

Until fairly recently, there was a rule in the police service known as "tenure". This rule basically stipulated that if a detective has been serving in the CID for a decade without them making any progress up the ranks then they would be put back into uniform as a means to make sure they aren't getting complacent. More than one detective actually chose to resign rather than face the (supposedly) humiliating move back into uniform division.

Most British police officers do not carry guns. This dates back to the founding of the first Police force in Victorian London: citizens were strongly opposed to the idea of lawmen patrolling the streets, so they were designed to be as PR-friendly as possible. The Police themselves, the Police Federation (the Union for rank and file officers) and the general public are all strongly against the routine arming of police officers in modern times. For the police, the reasons for this are twofold: a) it enables officers to get a lot more hands-on in taking down a suspect, rather than resorting to pepper-spray or a taser, because they don't have to worry about the perp trying to grab their gun and b) if the police were armed, they would have to train officers in how to use them. This would mean laying off everyone who failed to qualify, or accepting Imperial Stormtrooper Marksmanship Academy levels of skill at arms. As "ordinary" British criminalsnote Gang members and those involved in organised crime might do so, but your average burglar won't as it will massively increase his sentence if he gets caught generally do not carry firearms either this is not a major limitation. Most officers instead carry incapacitant spray and a baton. This is often called a truncheon, though this term specifically refers to the traditional 14-inch wooden baton. These days, a 21-inch collapsible baton is more common. Specially trained officers may also carry tasers.

That said, officers can undergo specialist training to become Authorised Firearms Officers (AFOs). These do not conduct day-to-day policing while armed. Rather, they respond to dangerous or sensitive situations that require a stronger deterrent or response. AFOs can pursue further training in urban assault and breaching to become Specialist Firearms Officers (SFOs). The requirements to become an SFO are comparable to that of a SWAT team in a major US city. In 2012, the Metropolitan Police Service introudced a further level of specialist training for SFOs to become Counter Terrorist Specialist Firearms Officers (CT-SFOs), whose qualification standards approach those of the United Kingdom Special Forces.

Use of firearms by armed police is very strict in all UK police forces. Armed officers even have to announce themselves as "Armed Police" to make clear who's on the scene. The use of lethal force is limited to situations when there's a imminent threat to life as defined by the European Convention of Human Rights. Individual officers must justify every use of their weapons, even for when they point their weapons at suspects. Additionally, all firearms officers have to take regular retests and attend refresher training. If they fail, they lose their authorisation and return to unarmed policing.

The MPS most famously operates SCO19 (previously SO19 and, before that, CO19). Other police forces refer to their firearms commands as Armed Response Units. These officers are regularly issued semi-automatic weapons for special duties and are authorised to shoot armed suspects without prior warning in special circumstances. A semiautomatic-only version of the famous Heckler & Koch MP5 was the most common shoulder-arm until relatively recently, but 5.56mm carbines such as the H&K G36 or Steyr AUG have begun to displace the aging 'Hockler'.

As a consequence, deaths on both sides of the equation are very rare - for example in 2020 five people were killed by police and one officer died in the line of duty and this was considered to be a bad year.

Additionally, unlike the rest of the United Kingdom, where officers only carry guns for certain duties, police officers in Northern Ireland are always armed when out on duty. For obvious reasons. On the mainland, two other specialist groups are also routinely armed: The Civil Nuclear Constabulary, who guard Britain's nuclear reactors, and Protection Command, whose remit is providing protection to the Royal Family, senior politicians, and diplomats.

If things get extremely out of hand, the British government can and will deploy military special forces such as the SAS with authorisation to use maximum force against armed criminals to decisively resolve the situation - unlike the USA, the UK has no restrictions on deploying military personnel to assist law enforcement, though it is very rare (now that The Troubles have ended).

The British police force that is by far the most often portrayed in fiction is the Metropolitan Police Service ("the Met" or "Scotland Yard"). It polices almost all of Greater London, apart from the tiny central area that is policed by the City of London Police. In fiction the Met has a tendency to be portrayed as horribly corrupt and sometimes being worse criminals than the people they arrest and has poor relationships with the other forces (in the past, at least, this was very much Truth in Television, but it is still a popular fiction trope).

The English and Welsh police are divided up into regional constabularies. Most of the remaining constabularies cover either a metropolitan area, a county or a couple of counties. The Scottish police used to be the same, but they were combined into a single force called Police Scotland in 2013. Northern Ireland also has a single force, the Police Service of Northern Ireland.

There are some other forces though:

Uniformed officers traditionally haven't worn name badges, but instead have worn ID numbers on their epaulettes. These are known as "collar numbers", as they used to be worn on the collar. There have been recent scandals

where uniformed officers have removed these epaulettes before expected public disorder situations.

Times are always changing, however, and since the 2000s some forces have required public-facing officers to wear name badges. In case anyone is interested, the reason they traditionally don't wear nametags is because officers with unusual or embarrassing names (Pratt, Dick, etc) would be subject to ridicule by antisocial types.