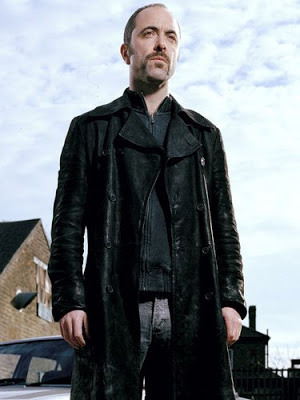 What can go wrong, may go wrong.
"I can't afford to look at the big picture. I made that mistake once before and I lost my daughter. Now I only look at the little picture - now I look after my own."
—Tommy Murphy
Advertisement:

It is revealed in the pilot episode that Murphy's wife and child had been held by criminals who asked to make him blow up a police station. Murphy chose the force, and lost his daughter. Her death has since riddled Murphy with guilt and he thus plunges himself into his dangerous work, hoping to drown out his thoughts and perhaps perish having done something good. Murphy is generally quite cheerful and charming on the surface however, and he often plays around with his superiors and colleagues as well as hit on woman any chance he can.

The series is known for this simultaneous humour and tragedy in Murphy (for which Nesbitt is known), and for its darkness - particularly in later seasons. Infact the series was created specifically for Nesbitt, who had previously shown his impressive acting ability in Cold Feet. The series was nominated for numerous BAFTA and IFTA (Irish) awards over its run and Nesbitt won one IFTA for his performance in 2005.

The pilot episode was adapted into a series of books by Colin Bateman, who also created and wrote for the series. Five series of Murphy's Law were aired between 2001 and 2007.