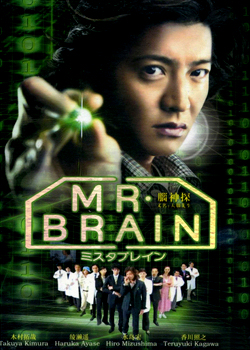 Mr. Brain is a Japanese television comedy drama aired on TBS in 2009.

Sypnosis by TBS (retrieved from wiki.d-addicts.com

Tsukumo Ryusuke is a quirky, yet brilliant neuroscientist working for the National Research Institute of Police Science. Wielding a unique perspective and psychology, Tsukumo tackles the nation's most baffling crimes and scandals, going head-to-head with the most brilliant and twisted criminal minds. But his eccentricities and poor social timing can also aggravate people and circumstances, further complicating matters.