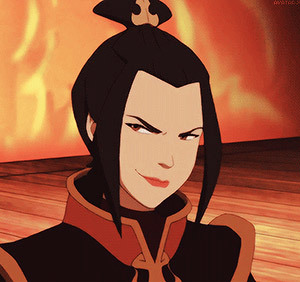 Peter Sullivan: Why are you always smiling?
Connor Rooney: Because it's all so fuckin' hysterical...
— Road to Perdition

As far as the most devious and subtle of villains are concerned, when it comes to facial expression, less is more. A Cheshire Cat Grin only warns people that something's afoot; a Slasher Smile is even more glaringly obvious. No, when someone's about to walk straight into your Death Trap or your Evil Plan is about to pay big dividends, it's best to show your smug superiority with a devious little smile, probably behind your victim's/lackey's back, or behind your hand (or hands). Only the villain and the viewers know that alarm bells should be ringing in the good guys' heads - but hey, they're the enemy, why give them advance notice? For obvious reasons, this subtle hint of treachery is especially likely to turn up as part of a Traitor Shot.

The Psychotic Smirk is a favorite with Big Bads everywhere. There's no need to broadcast just how dangerous they are - everyone's got a pretty good idea already, but no one can prove it. The important thing is to smile with only one side of the mouth. Sometimes, it's accompanied by a Finger Wag as if to say "Nice try, sucker" if the hero had attempted to defeat them.

Unfortunately, the understated effect is often ruined by an over-the-top Motive Rant when the penny finally drops for the heroes.

A particular type of Anti-Hero does this, too: the soft-spoken, underhanded ones who always know more than they let on, but never see fit to warn others of the danger.