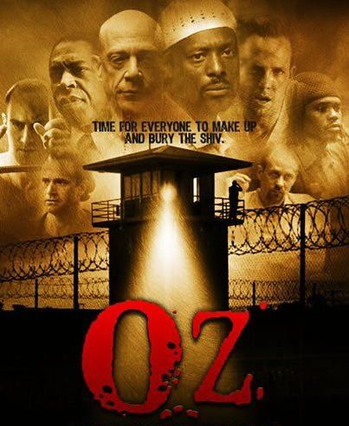 '"Oz: that's the name on the street for the Oswald Maximum Security Penitentiary. Oz is retro, Oz is retribution. You wanna punish a man? Separate him from his family, separate him from himself, cage him up with his own kind."
— Augustus Hill
Advertisement:

Oz is a six-season (1997-2003), one-hour drama created by Tom Fontana that follows the daily lives of the inmates and staff of the Oswald State Correctional Facility, nicknamed Oz. Inmates are divided between the main prison (Genpop) and "Em City", a unit with more perks for the prisoners at the price of more surveillance.

The struggles of gangs to control the lucrative prison trade in "tits" (drugs) creates much of the dramatic background, with cunning gang "leaders" attempting to leverage both their followers and the prison structure in a never-ending battle for dominance.

The staff of the prison, while treated sympathetically, is shown to be divided and isolated from events in the prison. Idealists such as Em City head Tim McManus (Terry Kinney), Father Ray Mukada (B.D. Wong), and Psychologist/Nun Sister Peter-Marie (Rita Moreno) attempt to introduce academic rehabilitation methods, while the more battle hardened Corrections Officers tend to view the prisoners as scum who deserve punishment, leaving the well-meaning yet politically astute Warden Leo Glynn (Ernie Hudson) to decide between them. Successes in reaching inmates are balanced by outright failure, while crackdowns on inmates that get superficial results sometimes lead to much bigger problems just beneath the surface.

The show was HBO's first original hour-long drama series, and was considered a forerunner of "Peak TV" series like The Sopranos and The Wire. The series was revolutionary in being uncensored, featuring only 8 episodes per season, and featuring numerousharacters who would become central to the story immediately, fade away, be killed, or be transferred unexpectedly.

When first released, the powerful first 15 minutes (featuring Beecher's entry into prison) forever branded Oz as "the show with prison rape." However, the show is more complex, attempting to tackle questions of the nature and origin of violence and criminality, but continually refusing to provide any easy answers. Every character on the show is morally ambiguous, with the "good" characters of the show sometimes committing despicable deeds while the "monsters" sometimes act humanely. The show also examined the issue of prisoner's rights and the effectiveness of the American prison system, which the show depicts as inherently corrupt.

The series received a sequel short film, Zo, in 2021, in which Tergesen and Winters reprised their roles.

Not to be confused with a certain other Oz. Or Dr. Oz. Or The Land Down Under.