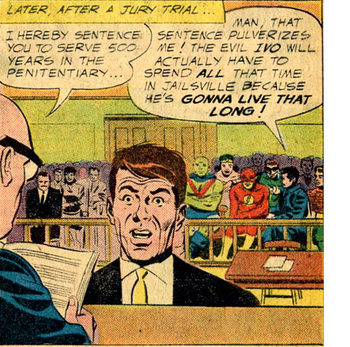 ...But with time off for good behavior, he could be out in 490.
"ONE MILLION YEEEAAARS!! DUNGEON!"
— Lemongrab, Adventure Time
Advertisement:

Bob commits a crime or (more likely) a series of crimes. The jury convicts him and thus the judge must determine an appropriate sentence.

The Judge decides to sentence Bob to 400 years of prison or eleven life sentences, essentially rotting in a cell. Bob has just been served a Longer Than Life Sentence.

Such sentences can be set sentences of a ridiculously huge amount of years (typically three digits) that, while theoretically having an end, can never be fully served by any ordinary person. They can also include multiple consecutive life terms, a single life term where the time before being eligible for parole is ludicrously long, or a superficially nonsensical sentence such as "one life term plus 40 years".

Sometimes it is not explained what the sentenced person did, just that they have X amount of years left that go beyond normal human life expectancy.

This is Truth in Television, as real sentences like all of the above examples exist. As shown in the Real Life folder, some of these examples exceed even the most exaggerated of fictional portrayals.

While in general no real-life sentence for a single crime can exceed 'one' life sentence or around 99 years for a fixed-length sentence, a person who has been convicted of multiple crimes at once can easily receive triple-digit sentences or multiple life sentences if the sentences for each crime run consecutively. This has a fully practical effect: there's always the consideration that some but not all of the convictions may be legitimately overturned on appeal (such as if a killer was wrongly accused of killing a second person). For example, a person convicted of two murders may be given two life sentences, or a 198-year sentence, or "one life sentence plus 99 years". In any of the cases, a conviction overturned on appeal will halve the sentence, leaving the person with still a life-length sentence.

An alternate possible consideration is that an extremely long set-length sentence can prevent a criminal from becoming eligible for parole in jurisdictions where the rules require them to serve a given fraction of the sentence first.

This trope can be used by an author to indicate that a criminal is truly hardcore and dangerous or has committed a particularly heinous crime (or crimes), or that a jurisdiction or judge is ruthless toward criminals or has it out for the one being sentenced. Of course, if the prisoner is ageless or otherwise Long-Lived, they may be faced with the daunting prospect of actually serving out the full sentence.

Basically, this trope is There Is No Kill Like Overkill applied to sentencing. A subtrope of In It for Life. See also The Old Convict and Disproportionate Retribution. Known in That Other Wiki as "back-to-back life sentences

Compare Grounded Forever, where children are punished by being grounded for absurdly long amounts of time.