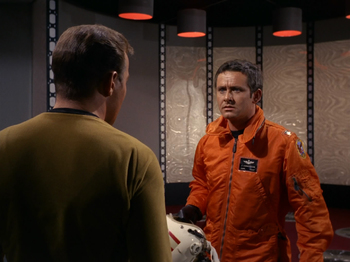 Kirk meets John Christopher, whose mere presence on the Enterprise is going to prove a bit problematic.
Advertisement:

Establishing shot: Stock Footage of an air force base..... from the 1960s. The RADAR detects a signal from just over Omaha, Nebraska. The officers discuss the unusual UFO that seems to have come from nowhere. Just when we're thinking some old war movie is being played by mistake, we hear the Theme Tune and see the Enterprise gliding through a blue sky and clouds.

According to the Captain's Log, the Enterprise encountered a black star of high gravitational attraction that forced them to use all their warp power to escape the pull, which propelled them plunging through space...and time itself! There's no signal from Starfleet and the Enterprise is being tailed by a relatively primitive craft. It is, however, armed with some nuclear warheads that could do more damage than they're able to repair in this time period, so they break out the Tractor Beam. It turns out to be more than the jet can handle, so the pilot is beamed aboard. He introduces himself as Captain John Christopher, 4857932. Kirk assures him he is not a prisoner and takes him to the bridge.

So, the Enterprise is trapped 200 years in the past with a "guest" who doesn't want to stay, but they can't let go. The engines are shot. They have no way of contacting Starfleet. There's massive injuries from that star that slapped the ship around like a pinball. And Kirk's computer is flirting with him.