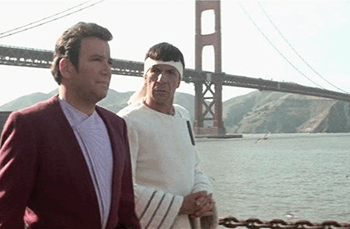 Putting the cast of a (relatively) fantastical setting into a contemporary, "normal" one. The entertainment often comes from the incongruity of not fitting in or the fact that we're seeing the characters in a realistic setting.

Exemplified by the famous and much enjoyed Star Trek episodes where characters either go to the past or get involved in a holodeck novel, and (in practice) leave their show's tropes behind a bit.

However, doing this as a Genre Shift (or a Retooled series's whole premise) is often too obvious to be successful.

If it involves people from a futuristic setting travelling into the past (or a recreation of it), expect there to be a Fan of the Past who provides exposition or takes charge.