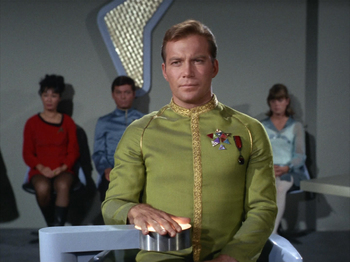 Let's see you charm your way out of this one, Kirk.
Advertisement:

After having gone through a severe ion storm, the never-before-mentioned Records Officer Lt. Comm. Ben Finney is dead. Now safely at Starbase 11, Kirk is filling out the necessary paperwork (does he have to do this for every Red Shirt?) and chatting amiably with Commodore Stone. Suddenly, Finney's teenage daughter Jame (pronounced "Jamie") bursts in and starts calling Kirk a murderer at the top of her lungs for no particular reason. It's after this that Stone notices the Enterprise computer's transcript suggests Kirk is guilty of culpable negligence in Finney's death.

Kirk soon finds himself facing (you guessed it) court martial and who does the prosecution turns out to be? Areel Shaw, one of Kirk's six million old girlfriends! For his own attorney, Kirk gets Samuel T. Cogley, a crazy old Luddite who doesn't use his computer, insisting that the law "really" exists in books. This is a bit like a modern-day lawyer insisting that the law really exists on papyrus scrolls, but never mind. Cogley decides to build his case on Kirk being a human and the computer being a soulless machine. It was mentioned prior to this that Finney had a huge grudge against Kirk, but this apparently isn't considered relevant.

Shaw starts off by questioning Spock, Bones and the ship's personnel officer. Jame is also present, constantly scowling and getting the odd cutaway shot. Cogley argues that Kirk is innocent because machines are inhuman and Shaw shows a video from the day which seemingly proves Kirk's guilt. Somehow, her case goes over better and Kirk finds himself in deep do-do. Meanwhile, Jame decides Kirk is innocent just about as arbitrarily as she decided he was a murderer and apologizes. Back on the Enterprise, Spock notices that the computer isn't as good at 3D chess as it should be and realizes someone tampered with it. Before making use of this evidence, Cogley, of course, has to go into a rant about the wheels of progress being out of control.

It's quickly deduced that Finney not only messed with the computer, but faked his death and is hiding on the ship when the Enterprise computer detects the sound of his heart beat. Kirk sets off to confront Finney alone since This Is Something He's Got to Do Himself, leading to the obligatory fight scene with the crazed Finney complete with yet another one of Kirk's uniform shirts being torn in the process. Finney admits to sabotaging the Enterprise, causing the ship's orbit to decay. Kirk fixes this up with a stop by the Jeffries Tube and the bridge

All is resolved. Cogley plans to defend Finney, Shaw, obviously happy she lost, kisses Kirk and the Enterprise sets off on her next adventure.