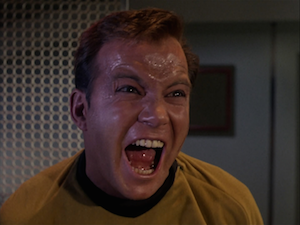 If you look close, you can see bits of scenery in his teeth.
Advertisement:

Kirk, Sulu and some unusually long lived Red Shirts are collecting specimens from Alfa 177 when someone falls down a hill and gets a boo-boo. He's beamed up, along with a strange, magnetic ore that he picked up in his fall. Shortly after, Captain Kirk beams up, feeling a little woozy. Scotty leads him away, even as Kirk warns him not to leave the transporter room unattended. What beams up next is... Captain Kirk! You can tell it's an evil Kirk! He's wearing eye liner and sweating like a pig!

So now, Kirk's got a doppelganger running about acting more like Captain Morgan than Captain Kirk. No one dares use the transporter now, so Sulu and company are left behind on a planet that gets well below 0 at night. And it seems that whatever happened to Kirk also happened to a little canine creature. One's a sweet little lap dog, the other... well, ever see that Tom and Jerry cartoon called "The Cat's Me-Ouch!"?