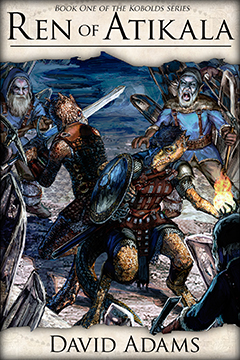 It's basically Drizzt Do'Urden meets Goblins. With kobolds.
I was born dead.
— Ren of Atikala
Advertisement:

is the first novel of the Kobolds series. Inspired by the Pathfinder RPG and set in the world of Drathari where Gods once existed but are now dead, it's a view of a stereotypical sword-and-sorcery fantasy world through the eyes of a race typically considered monsters.

The protagonist, Ren of Atikala, is a young kobold sorceress and warrior who struggles with a lack of identity, the prejudices of her people, and the destruction of her home city.