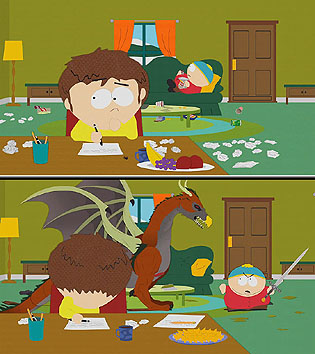 Above: the invention of the wildly popular "Fishsticks" joke.
Below: Cartman's memory of the event.
"Never underestimate the ability of a human being to rationalize the truth."
— From the very short list of so-called Moscow Rules used by the CIA when operating in the USSR
Advertisement:

A Self-Serving Memory is a Flashback that is blatantly altered to serve the needs of whoever is remembering it. More often than not, it is played for comedic effect, though it is used a decent amount for dramatic purposes by arrogant jerks.

At the lowest level, it is mainly used for dramatic purposes by a Consummate Liar to suit their needs or manipulate other characters. When cranked up, however, it can result in wildly fantastic scenarios which, more often than not, are impossibly unrealistic. Depending on the believability of the character dreaming this up, it can be quite funny, both as a standalone gag or even as a plot point.

As psychologists, police officers, and lawyers can attest, this is Truth in Television: only people with photographic memory don't have self-serving memories. Memories are not so much recalled as they are reconstructed (created anew from mental scraps) and framed by the words used to express them. Factors including general mood, ambient temperature, and word choice influence memory reconstruction.note For instance, people who are shown footage of a car crash and are then asked to estimate the speed at which it occurred genuinely believe that it was higher when the question paper uses the word "smash" rather than "contact". Over time, self-serving bias is capable of completely erasing, changing all content within, or creating false memories.

See also Flashback Fail and "Rashomon"-Style. Compare Unreliable Voiceover, The Münchausen, Theory Tunnel Vision and Crazy Memory. May be related to I Reject Your Reality and can go hand-in-hand with Believing Their Own Lies and Never My Fault. May overlap with Once More, with Clarity! if the accurate version is shown after the self-serving version.