Recap / Star Trek: The Next Generation S3E14 "A Matter of Perspective" 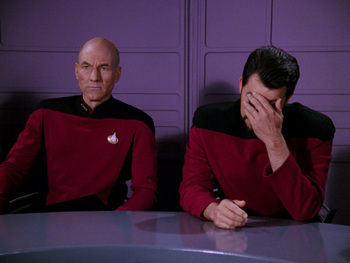 Riker is aboard a research station Botanica Four checking on the progress of Dr. Nel Apgar, a Tanugan scientist who is working on the invention of Krieger waves, a new source of energy. Just as Riker beams back to the ship, however, the station explodes, killing Apgar. A Tanugan detective, Krag, arrives on the ship to arrest Riker for murder.

Picard is caught between his responsibility to impartially respect the laws of other cultures and his duty to protect his crew. He convinces the detective to conduct his investigation aboard the ship, using the holodeck to recreate the station exactly. Krag, Picard, Riker, and Troi watch a series of recreations of Riker's time on the station, each portraying his stay from the perspective of a different witness.

Riker's version has him and Geordi beam aboard to meet a stand-offish Apgar and his accommodating wife Manua. Apgar is upset that the Enterprise has arrived early to check on his work, but Riker assures him that it's just a friendly visit. The Enterprise is about to leave to conduct other business, so Manua offers to let Riker stay on the station (even though he and Geordi have reservations planetside). When Riker and Manua get a moment alone, there's some sexual chemistry that Manua tries to exploit and Riker politely tries to resist, but Apgar interrupts them and accuses Manua of cheating on him. He tries to punch Riker, but Riker easily dodges the attack and tries to calm Apgar down. The humiliated Apgar vows revenge, but Riker leaves the station the next day without incident.

Manua's version, however, differs significantly. Riker behaves lasciviously, leering at Manua throughout his introduction and insisting that Manua set him up for the night. When they're alone, Riker tries to force himself on Manua only to be interrupted by Apgar, whom Riker pummels mercilessly. Apgar's research assistant provides the story that Apgar himself told her, in which Apgar walks in on Riker and Manua starting an affair and beats up Riker, who is the one to vow revenge. Through it all, Troi maintains that each person is telling the truth as he or she remembers it.

Meanwhile, Data, Geordi and Wesley investigate a series of strange radiation spikes throughout the ship. They eventually conclude what the source is, which gives Picard the answers he needs to announce that he's discovered who killed Apgar. He assembles all of the parties involved and explains what happened.

Apgar had secretly completed his work on Krieger waves. The radiation spikes around the ship were actually Krieger waves being reflected off the holodeck's version of Apgar's completed machine. Apgar was planning to sell it for use as a weapon rather than give it to the Federation, which is why he was nervous about Riker's early visit. After seeing Riker with his wife, Apgar decided to use his Krieger waves to kill Riker and make it look like a transporter accident. But the Krieger wave that Apgar fired at Riker bounced off the transporter beam and reflected back into the machine, causing it to explode.

Krag is satisfied with this explanation and withdraws his request for Riker's arrest. Picard welcome Riker back to the bridge and allows him to set the next course.

Tropes featured in "A Matter of Perspective":