Literature / How to Be a Superhero 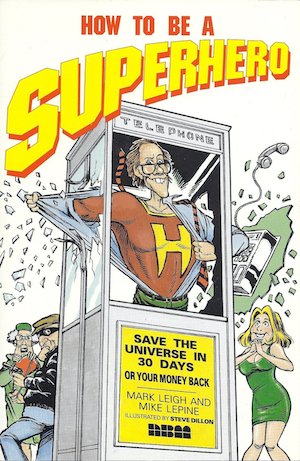 "I want my money back."
—Captain Shrivelled Manhood
Advertisement:

How to Be a Superhero is a book by Mark Leigh and Mike Lepine, illustrated by Steve Dillon, and published in 1992 by NBM.

As the title indicates, this is a parody of various "how-to" books, guiding the reader through the steps and considerations needed to be a Comic Book Super Hero. Topics include how to acquire superpowers, do-it-yourself cyborging, choosing a proper Secret Identity, licensing and financial support, and the problems with kid sidekicks. The writing style is breezy and conversational, with a lot of Lampshade Hanging of Super Hero Tropes peppered with a good dose of Toilet Humor.

This book demonstrates the following tropes: