Literature / How to Survive a Horror Movie 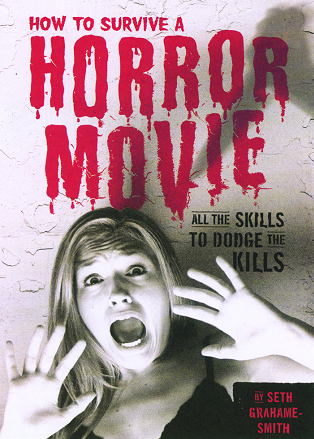 "I'm sorry to the countless people whose lives I've cut short. The characters who've become unwilling sacrifices to my art: The buxom babysitters. The doubting cops. The overbearing parents and well-intentioned boyfriends. Teens with their whole lives ahead of them. Decent, hardworking adults. All sent to an early grave in the name of box-office gold."
— An apology from Wes Craven
Advertisement:

You know the handy rules that Scream (1996) provided us on surviving a horror movie? Well, somebody's expanded them into a whole book.

How to Survive a Horror Movie: All the Skills to Dodge the Kills is a 2007 book by horror lover Seth Grahame-Smith (of later Pride and Prejudice and Zombies fame) that details what you should do in the event that you find yourself stuck in a horror movie. In it, you will learn how to perform an exorcism, what to do if you did something last summer, how to persuade the skeptical local sheriff, how to kill a murderous doll, how to survive an Alien Invasion, what to do if you've been dead since the beginning of the movie, how to defeat Satan himself, and many other useful skills. It's divided into six chapters, each devoted to a particular subgenre: an introduction (how to tell that you're in a horror movie, and rules that apply across the genre), slashers, evil inanimate objects, the undead (namely ghosts, vampires, and zombies), aliens and beasts, and finally, demonic and religious evil.