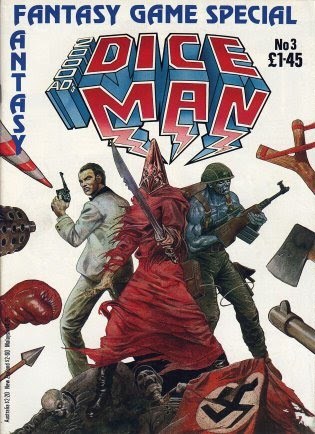 Dice Man is a short-lived Gamebook comic spinoff of 2000 AD. It ran for just five issues but featured many famous characters from the comics including Judge Dredd, Nemesis the Warlock, Rogue Trooper and Sláine as well as the original character Rick Fortune, the eponymous "Dice Man" of the title — a psychic Hard Boiled Detective with a pair of magical dice that can grant him supernatural powers. The last issue featured a parodic adventure of Ronald Reagan.

The series consists of five issues.

Some of the stories would later be featured as bonus content in anthologies featuring the the characters in question. A year after the series came to its premature end the writers of Twilight's Last Gleaming! would publish the similar You Are Maggie Thatcher – A Dole-Playing Game in book form but the format has not been revisited since.

Not related to the 1971 novel The Dice Man