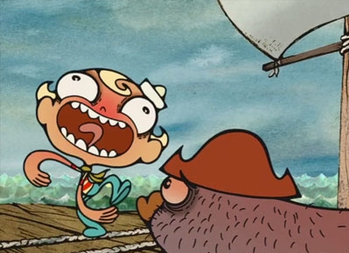 "Don't drink the ocean, K'nuckles! Seawater makes you crazy! Look at me! I've been drinking it for hours!!! NYEHAHAHAHAHAHAHA!"
Advertisement:

Being away at sea for a long time seems to take its toll on your mind. Maybe it's the unchanging landscape, maybe it's being away from your loved ones. Either way, in period pieces and even sometimes in modern ones, you can expect any characters away on sea for extended periods of time to go crazy.

Historically a Truth in Television. In addition, there's a lot of validity to the "don't drink seawater" idea, since salt water has the nasty effect of making you even more dehydrated, which can lead to delirium. And, y'know, death. That is, if the crew haven't already thrown you overboard in disgust.

Compare Cabin Fever, Space Madness, and Eldritch Ocean Abyss (for when a trip to the bottom of the ocean drives you mad for more explicit reasons).

Note, however, that ocean madness is no excuse for ocean rudeness.

Flapjack and Captain K'nuckles learn the hard way about why you should never drink sea water.

Flapjack and Captain K'nuckles learn the hard way about why you should never drink sea water.