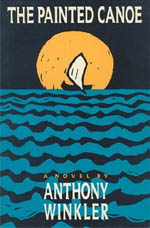 Miles away from home...
Advertisement:

The Painted Canoe is a novel by Jamaican writer Anthony Winkler, which was published in 1984.

Zachariah Pelsie is an extremely ugly fisherman who lives in the community of Charity Bay. One day, while out fishing as usual, he dozes off...and when he wakes up, he finds himself far away from shore. He must now make his way back to land in his canoe, battling the elements, hunger and thirst, a man-eating hammerhead shark, and his own troubled memories.

Meanwhile, back on land, his family and neighbors have varying reactions to his disappearance. As he travels on the sea, Zachariah reflects on his relationships with each of them, and on how he will relate to them when he finally returns.

The Painted Canoe was Winkler's first novel, and is stated to be his favorite.

Tropes present in The Painted Canoe: