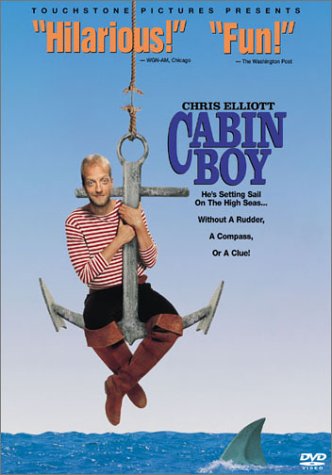 Cabin Boy is a 1994 fantasy comedy film co-produced by Tim Burton, directed by Adam Resnick, and starring Chris Elliott (Get a Life).

"Fancy Lad" Nathaniel Mayweather is due to graduate from board school, after which he will return home to take over the family business. On his way to the docks to ride an ocean liner home to Hawaii, Nathaniel's bad attitude upsets the limo driver, who promptly throws Nathaniel out. Walking to the docks by foot, his naive yet arrogant nature leads him to an old fishing oat at port, where its mentally challenged cabin boy Kenny(Andy Richter) lets Nathaniel on board. Discovered by a very angry crew the next morning, the fancy lad is abused & insulted until he tricks Kenny into plotting a course for Hawaii... unfortunately this course leads directly through a haunted area of sea known as Hell's Bucket, upon where Kenny is thrown overboard and the crew make Nathaniel their new cabin boy as punishment. That's assuming they survive Hell's Bucket.