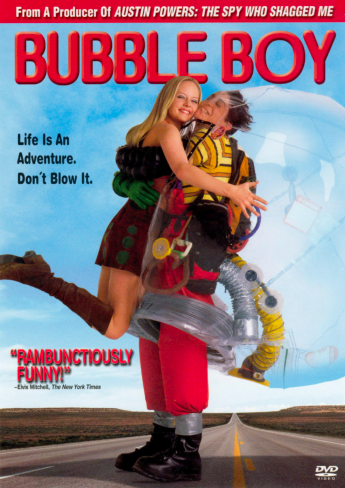 Bubble Boy is a 2001 comedy directed by Blair Hayes and starring Jake Gyllenhaal as the eponymous Bubble Boy, Jimmy Livingston.

Raised in a hyper-conservative home by a clingy mother (Swoosie Kurtz) and a nigh-voiceless father (John Carroll Lynch), Jimmy grows up reading Highlights magazine, homeschooling, and watching Land of the Lost reruns. When he becomes a teen, a new family moves in next door, including a literal Girl Next Door named Chloe (Marley Shelton), who strikes up a close friendship with him. Then, sometime after she graduates from High School, she tells Jimmy that she's going to Niagara Falls to get married to her High School Sweetheart in three days... but gives a very blatant hint that she'd prefer to be with Jimmy before leaving (namely, a home-made snowglobe with figures of them inside reading "I love you."). So now Jimmy is on a Race for Your Love across the continental United States to stop the wedding and get the girl. Hilarity Ensues.