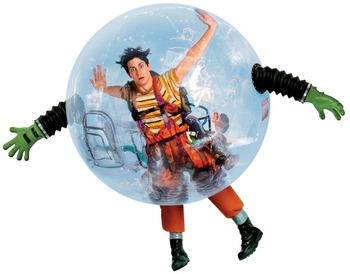 "This is the same plastic bubble that my father put me in for 14 happy years! [chuckles] Hey there, bubble boy!"
— Ebenezer Wheezer to his son Carl, The Adventures of Jimmy Neutron, Boy Genius
Advertisement:

Someone is living in a bubble — literally.

The usual reason is because the Bubble Boy (or Girl) possesses a weak immune system or other rather serious illness and simply cannot venture out into the world without any protection. Any attempt to do so would prove nearly or completely fatal. So obviously, this trope is almost always played for comedy. Either it will set up a situation where characters are expected to treat someone like a woobie when they're all Jerkass, or they'll be in a mobile hamster ball that's used for physical humor. If the bubble is broken, expect the character to be fine. Serious depictions are rarer, but can be good.

Frequently The Woobie as a result.

Not to be confused with someone whose chances to be in the Inevitable Tournament (or make "the Money" in Poker) are a Million to One; many protags that fall under that definition of "Bubble Boy/Girl

" can expect to benefit from a Disqualification-Induced Victory.