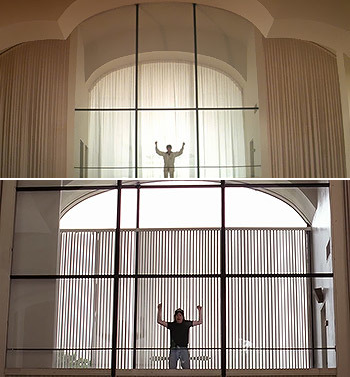 "Wayne, you're trying to imitate me, aren't you?"
Advertisement:

Start with a wedding, going along more or less as expected. As things approach "I do", everyone turns to the back of the church. There, banging on the glass and calling the name of the bride or groom, is the interloper.

The trope name comes from the Ur-Example at the climax of The Graduate. Most of these examples are straight parodies and/or Homage Shot (s); the rest are copies of copies due to Pop-Cultural Osmosis (ala Pietà Plagiarism).

Usually part and parcel with the Wedding Deadline.

If you're looking for the other The Graduate Homage Shot, see Between My Legs.