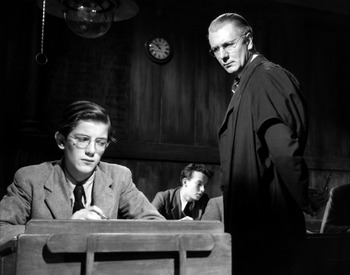 Before Snape there was Crocker-Harris...
"A single success can atone and more than atone for all the failures in the world."
Advertisement:

The Browning Version is a one-act play by Terence Rattigan, originally written and performed in 1948.

The play focuses on Stern Teacher Andrew Crocker-Harris, who teaches classics at an English boarding school. He's being forced into retirement due to ill-health; his students hate him and his wife Millie has an open affair with science teacher Frank Hunter. Crocker-Harris is snapped out of his funk by Taplow, a young student who likes and pities the teacher.

Despite its brief length, The Browning Version is often considered Rattigan's best work (along with The Deep Blue Sea and The Winslow Boy). It serves as a Deconstruction of the inspirational teacher genre: Crocker-Harris is neither that nor a Sadist Teacher, but portrayed sympathetically as a man who lost his way and never achieved his potential.

There have been numerous film and television adaptations of the play. The most famous is a 1951 production, directed by Anthony Asquith and starring Michael Redgrave as Crocker-Harris. Redgrave won the Best Actor Award at Cannes Film Festival, and his performance continues to be regarded as an acting tour de force. A 1985 BBC television production starring Ian Holm and Judi Dench was also well-received. A 1994 remake, directed by Mike Figgis and starring Albert Finney, Greta Scacchi and Matthew Modine, received mixed reviews. Many critics disliked the Setting Update and alterations to the play, though Finney's performance was generally praised.

The play and its film adaptations contain examples of: