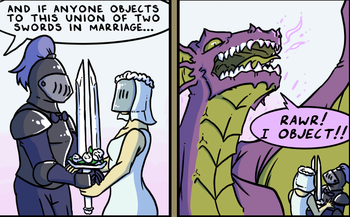 Donkey: Look, you wanna do this right, don'tcha?
Shrek: [about to burst into the cathedral] What are you talking about?
Donkey: There's a line, there's a line you gotta wait for: the priest's gonna say, "Speak now or forever hold your peace," and that's when you say, "I object!"
— Shrek
Advertisement:

The Love Interest is about to get married to the Romantic False Lead, everything seems to be going smoothly, and the cleric gives the line, "Speak now or forever hold your peace" — which in the world of fiction is basically an invitation for someone to voice their objection to the marriage. The usual way the trope goes is for another character to burst in with an Anguished Declaration of Love, and possibly a denouncement of the hypotenuse as an utter Jerkass. If the wedding crasher is one of the good guys, the love interest will dump the hypotenuse and reciprocate the protagonist's feelings, and the new couple may even get married on the spot. Cue Happily Ever After.

Thanks to Pop-Cultural Osmosis, people will anticipate shenanigans of some sort when the officiant gets to this line, both in fiction and in Real Life. That lends this trope well to being played with. Some of the more common variants are attempts to get the officiant to Skip to the End, the objection being particularly stupid or irrelevant and easily ignored, a character whom everybody expects to voice an objection staying silent, using the objection as an excuse to wreak havoc, and someone voicing the objection before the line is even said (and getting shouted down because you have to wait for the line). It's also a great opportunity for a Big Damn Heroes moment, if the villain is forcing someone to marry him or her under duress.

It's a Discredited Trope these days; the line is indeed said in Real Life weddings, but not as much as it used to be. The original purpose of the line was to see if anyone knew any legal reason that the couple couldn't be married (e.g. one of them is already married to someone else, or the parties are related to each other, or one of them is underage). Modern wedding ceremonies tend to drop the line, mostly because of this trope — it's an invitation for some Stalker with a Crush to crash someone's wedding, and a few Jerkasses have been known to crash strangers' weddings and, upon hearing the line, promptly call the bride a disease-ridden whore. And now that civil marriages have largely superseded religious marriages in most Western nations (at least on the legal end of things), the government can just refuse to issue a marriage license upon discovering that the marriage cannot legally take place. That said, the line is still required for certain religious wedding ceremonies, most notably in the Church of England.

The trope commonly goes with Race Against the Clock — if you're too late and the officiant has already said the line, you don't get another shot. See also "The Graduate" Homage Shot, involving a particularly famous use of this trope (or attempt thereof, as the case may be). Compare with Wedding Deadline, the other dramatic moment to interrupt the ceremony.

The Straight Man: Yes! Me!
Guests: Ohhh, come on!

A rare spoof of this trope.

Alternative Title(s): I Object, You Can Kiss The Bride Now

A rare spoof of this trope.