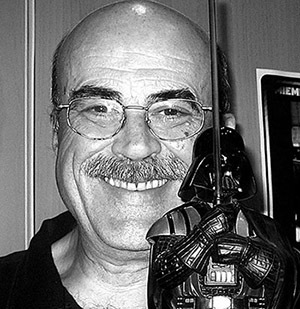 La voz de truenonote "The Voice of Thunder". That's how he was called in an article from the Spanish newspaper El País dedicated to his voice acting career

, published after his passing.
Advertisement:

One of the most recognizable voices of the Spanish dubbing industry and one of its most charismatic personalities, Constantino Romero García (May 29, 1947 - May 12, 2013) was a Spanish TV and radio host and actor. Constantino Romero was famous for his deep, utterly badass voice, perfect for tranquil roles. He was known for being the official voice of Clint Eastwood (even though Clint is known for having a very raspy one), James Earl Jones and Roger Moore in his James Bond years.

He was also famous for voicing some of the most charismatic characters in Film History like the very Darth Vader, the Terminator Number T-800, Roy Batty in Blade Runner, Sgt. Emil Foley in An Officer and a Gentleman, Captain James Tiberius Kirk in the Star Trek films and so on. And thus, many memorable film quotes from the 70s, 80s and 90s sound with his voice for Spaniard movie goers.

Though not very prolific in animated works, he also participated in a few, specially in the Disney Animated Canon, being his most iconic roles in this medium King Mufasa in The Lion King (1994) and Judge Claude Frollo in The Hunchback of Notre Dame (the latter being one of the few roles where you can listen to his singing talent). Also in anime, he is still fondly remembered for voicing Count Brocken in Mazinger Z.

He retired on December 12, 2012, with his final role as Clint Eastwood in Trouble with the Curve. Sadly he passed away due to complications from amyotrophic lateral sclerosis shortly after on May 12, 2013, in Barcelona at the age of 65. Tons of people who grew up listening to his voice were sad for his passing, and even dub haters and original version purists recognized his incredible career.

Some of Constantino Romero's roles were: