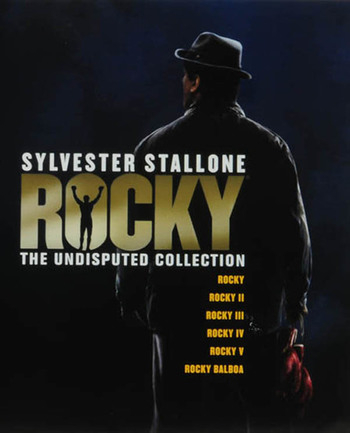 The idea for the first film was inspired when Sylvester Stallone, then a down-on-his-luck-actor, went to see a Muhammad Ali bout against Chuck Wepner. Wepner was a tough fighter with a lot of heart but little skill and a bad record, and he was most famous for frequently bleeding profusely during his bouts. The bout was intended to be a breather — an exhibition for Ali after his unbelievable (and hardfought) victory over George Foreman less than six months earlier — but to the astonishment of all, Wepner managed to knock Ali down in the ninth round (video replays showed it was actually more of a trip; Wepner happened to be standing on Ali's foot when the blow landed, which caused Ali to lose his balance when he tried to move).

The franchise has also led to a Spin-Off titled Creed. The film focuses on Apollo Creed's son, Adonis Johnson, who becomes a fighter against the wishes of his family, eventually seeking out Rocky (Stallone once again) to be his trainer. Ryan Coogler wrote and directed the film, and his Fruitvale Station star Michael B. Jordan plays Adonis. The film was released on November 25th, 2015 to great success and spawned a sequel, Creed II. A third Creed film is in production, while Stallone has also discussed a seventh Rocky film.

There were also a handful of video games that were made based on the series: