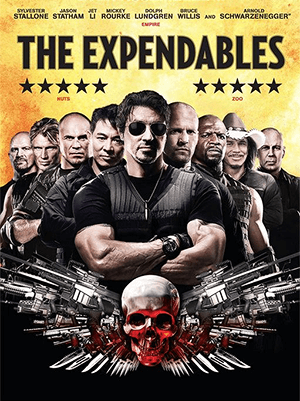 "If testosterone could mate with an explosion, this movie would be its offspring."
— IGN.com preview
Advertisement:

A modest action movie franchise that intentionally contains pretty much every trope associated with 1980s action movies. After the success of Rocky Balboa and Rambo IV, Sylvester Stallone became interested in making a film that brought together as many action stars he could get with careers ranging from the 80's to modern day.

The basic premise goes along with some grizzled mercenaries based out of New Orleans who call themselves "The Expendables." Stallone leads them as Barney Ross, with Jason Statham as Lee Christmas, his closest friend. Rounding out the rest of the team is Jet Li as Ying Yang, Dolph Lundgren as Gunnar Jensen, Randy Couture as Toll Road and Terry Crews as Hale Caesar. And, most famously, Stallone's box office rival Arnold Schwarzenegger plays Barney's Friendly Enemy Trench, who leads a rival team. Outside of that core group, many other stars have come and gone through the various movies, some as new allies and others as villains.

The actual plot starts with a mission to deal with boat hijackers, Gunnar is expelled from the team for his unpredictable behavior. Ross gets a new job from the mysterious Mr. Church (Bruce Willis). He hires the team to go into a Banana Republic and single-handedly take down a dictator's (David Zayas) regime. After a disastrous scouting mission, they learn Church is connected to the CIA and their real job is to upset the profiteering from a rogue CIA agent James Munroe (Eric Roberts), who has a particularly nasty bodyguard named Paine ("Stone Cold" Steve Austin). They initially agree to walk away from a likely suicide mission and from doing the CIA's dirty work, but their contact Sandra (Giselle Itie) is captured by Munroe and they feel obligated to rescue her, and Gunnar is not happy with being rejected from the team.

While unabashedly masculine action movies, they also attempt to show just how depersonalized the body count can be to a mercenary, along with a few quiet moments of reflection and the struggles of aging soldiers staying relevant while feeling their age.

This series is the closest we'll probably get to TV Tropes, the Movie

An all-female Spin-Off was pitched and pretty much every actress who had ever played an Action Girl was suggested, though the project does not seem to have gotten past "What if all women, and a stupid pun [The Expendabelles] for the name?" note The fact that the supposed plot was a fairly misogynistic "Male team gets killed, female team gets recruited to infiltrate as prostitutes" probably didn't help. Meanwhile, a fourth film was eventually Saved from Development Hell and produced in 2021 for a release the following year; Stallone confirmed this would be his final appearance in the series, with any future installments to feature Statham as the lead.

The Expendables provides examples of: