Film / Exception to the Rule 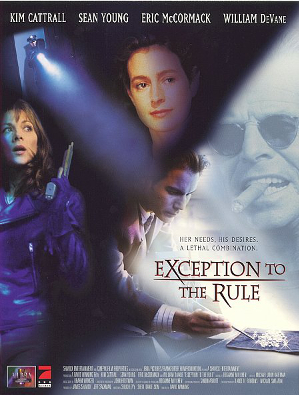 and released in 1997. It was produced/distributed by Artisan Entertainment (later acquired by Lionsgate) and Shavick Entertainment.

Tim Bayer (Eric McCormack) is a diamond trader unhappily married to Angela (Sean Young), who also happens to be the daughter of his boss Larry Kellerman (William Devane). Despite seeking advice from his co-worker Ron and psychiatrist Dr. Beeson, Tim still feels his marital relationship is getting worse.

When Tim meets the beautiful Carla Rainer (Kim Cattrall) it quickly leads to a passionate one night stand. Unfortunately for Tim, his "chance encounter" was not an accident. Carla turns out to be a scheming criminal intent on stealing a collection of diamonds from Larry's firm. And she will stop at nothing - including blackmail and murder - to achieve her goal.

Exception to the Rule contains examples of: