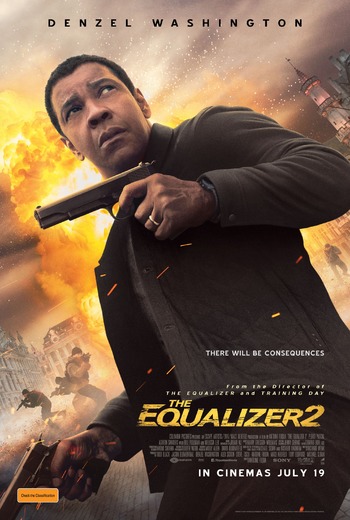 There is no equal.
"The mistake you made was you killed my friend. So, I'm gonna kill each and every one of you. And the only disappointment in it for me is that I only get to do it once."
— Robert McCall
Advertisement:

The Equalizer 2 is a 2018 action thriller film and the sequel to 2014's The Equalizer which is itself based off of the television series of the same name. Antoine Fuqua and Denzel Washington return for their fourth collaboration, and Washington's first sequel in his storied career. The film also stars Pedro Pascal, Ashton Sanders, Bill Pullman, and Melissa Leo, and was released on July 20, 2018.

After the events of the first movie, ex-Marine and Defense Intelligence Agency (DIA) operative Robert McCall has relocated and returned to a quiet life, helping his neighbors including a troubled teen being lured by a neighborhood gang and working as a Lyft driver. However, this is shattered when his close friend in the CIA, Susan, is killed while investigating the murder of a diplomat. This personal tragedy sends McCall reaching back into his particular set of skills to get to the bottom of it all, especially when he himself is the next target.

The Equalizer 2 contains examples of:

"They're going to war with me."