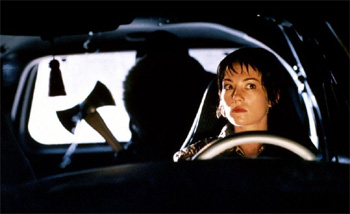 Watch out cause this may sting.
"Rule #31: Always check the back seat."
— Zombieland
Advertisement:

A character walks to their car. She may be aware that something is dangerous out there, or we may get a creepy vibe. But eventually she gets into the car, unharmed and prepares to drive off. She adjusts the rear-view mirror and- OH GOD TEETH IN THE FACE!

Perhaps it's because there's some idea of a car as a safe place, but attackers in TV regularly hide in your backseat, waiting to attack when you enter the car. Whether it's psychos with knives, hitmen with fiberwires, flesh eating monsters or mysterious spies with secret information, the intrusion of personal space is creepy if not outright terrifying. It's nearly never noticed before the victim is in their car, and no reference is made to how they got in without breaking the windows.

Occasionally a stealthy or mysterious Anti-Hero protagonist can pull this off to intimidate someone, but it's not a very heroic thing to do — it's rude! Chances are high he'll do it with a *Click* Hello if he uses a gun.

Unfortunately, this can be Truth in Television.

An attempt to escape Claridge via an abandoned police car goes awry when there turns out to be a parasite-infested victim still in the backseat.

An attempt to escape Claridge via an abandoned police car goes awry when there turns out to be a parasite-infested victim still in the backseat.