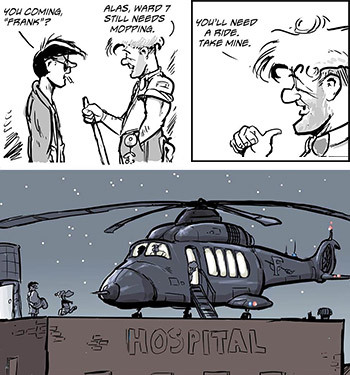 "Just be sure to fill up the tank before you bring it back."
"In the unlikely event I ever become president of a company, my first order of business will be to promote the janitor to executive vice president. Then I'll call him into my office and say: 'All right, Herb, I want you to tell me what's going on in the company. Care for a drink before we begin? I think I have a bottle of Scotch around here someplace.'

'Lower left drawer of your desk,' Herb will reply, 'Right behind your box of El Puffo cigars, which, I might add, are excellent.'"
— Patrick McManus, The Good Samaritan Strikes Again
Advertisement:

Some works of fiction live and die on rankings. The characters have their own power hierarchy, but usually you'll find that each character's power level is consistent with their rank.

Then there's the Almighty Janitor.

The Almighty Janitor is that character who is near the bottom of the scale in terms of rank, but is at the top in terms of what he can actually accomplish. Maybe he screwed up in the past, maybe he pissed off the higher-ups and has been paying for it ever since, maybe he's really lazy, undercover, maybe the burden of being a genius took a toll on them or maybe he just likes his job (perhaps more than clinically recommended). Often, his lowly position is the very thing that grants him access to the true levels of power (for one thing, nobody pays much attention to him, so nobody interferes with him). Typically, he'll never go up in rank at all.

Compare Hyper-Competent Sidekick, who is similar to the Almighty Janitor in terms of being the one who really gets things done, but still has to do what the boss says. The Almighty Janitor is largely immune to the whims of the higher-ups and can disregard them at will. Compare and contrast Scullery Maid, who may or may not dabble with being an Almighty Janitor, but comes into her real power outside the scullery. When the Almighty Janitor does things right and people know it but he still doesn't get promoted, there is overlap with Limited Advancement Opportunities. A secretary is also a common recipient of this trope. Contrast Authority Equals Asskicking, Overranked Soldier, and More than Just a Teacher.

A Giant Mook is similar to an Almighty Janitor in being low-ranking and dangerous, but is generally at least logically employed as a soldier.

When the Janitor really is the Almighty, see God Was My Copilot, and when a person in power simply styles themselves "Janitor," it's Just the First Citizen. If they used to be of high rank, they were probably Gracefully Demoted. Not to be confused with our former almighty admin. See also The Alleged Boss.

A silent retelling of Site-30s Janitor told entirely with the cooperation of both SCP-387 and SCP-705.

A silent retelling of Site-30s Janitor told entirely with the cooperation of both SCP-387 and SCP-705.