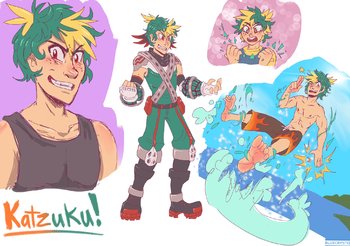 Collage of Katzuku, the first of many Fusions. Art Provided by bluecrysto.

is a My Hero Academia fanfiction by | OmegaInfinity |

where Izuku can fuse himself with inanimate materials and other people.

What if Izuku's Quirk was a combination of Kevin Levin's Osmosian ability and the Fusions from Dragon Ball Z and Steven Universe? Well this is that fic, Izuku's fusions amplify and alter the abilities of his partner. What If Ochako could control what she floated? What if Momo could become any material? Find out, here.