Fanfic / Defenders of the Universe 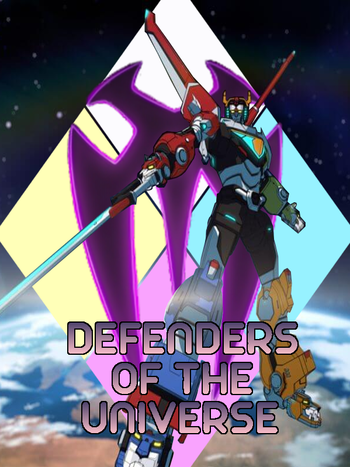 After successfully saving the Earth from the Cluster, Steven Universe returns to Beach City to hang out with his friends and enjoy some downtime. However, a series of events spurs him, Connie, the Crystal Gems, and their new friend Katie "Pidge" Holt on an adventure that takes them beyond the confines of not just Earth, but their very galaxy as well. Through this, they learn that the Diamond Authority aren't the only threat to the universe. Now, if they are to defeat this new threat, they will need to bring together an ancient warrior loved by good and feared by evil...

Voltron, the Defender of the Universe.

Defenders of the Universe

) is an Alternate Universe crossover fanfic between Steven Universe and Voltron: Legendary Defender, with Sym-Bionic Titan added later, by Halo20601 AKA MasterCheifMan

On December 4th, 2019, the story was handed over to erica.phoenix16

, due to Halo progressively losing interest and enjoyment in writing it. However, the story would later be adopted by jorge-Fuentes18

(who incorporates elements of Warhammer 40,000) and be retitled The Defenders of the Universe Returns

Defenders of the Universe provides examples of: