The Power of Creation 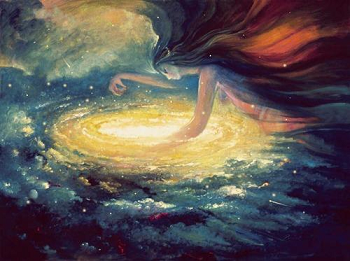 Beyond Reality, Freydoon Rassouli
"Ours is the wisdom to weave the fabric of reality... Ours is the power to create!"
—Hythlodaeus, Final Fantasy XIV
Advertisement:

The power to create. That marvelous ability to make something under your own power.

It can go one of two ways in fiction. The first and more frequent type is simply having the power to take something (a basic material like atoms, dirt, rock, Mana, etc.) and create something else with it (a more complex object). The other version has the character make something out of thin air, or, more accurately, nothing. The created object in question may be permanent or temporary, depending on the character's ability and/or intention. Likewise, the scale, complexity, and other traits of what was created varies as well.

More advanced users may also be able to create life, which might or might not make the character a Mook Maker.

Contrast The Power of the Void. Compare and contrast the Reality Warper, whose power is "merely" altering realty, rather than adding to it. Though there is some overlap if the Reality Warper can shape reality into more complex structures, or make it whole cloth for those who are exceptionally powerful. An Imagination-Based Superpower is closely related to this one. Often the mark of a god. The Maker always exhibits this as well (they "make" after all). Often related to The Power of Language.

Please note: This is only for people who have this as a power. Someone who creates something in a mundane fashion may be a Weekend Inventor or have access to a Matter Replicator.

Ladybug holds the power of Creation, her Kwami the Kwami of Creation.

Ladybug holds the power of Creation, her Kwami the Kwami of Creation.