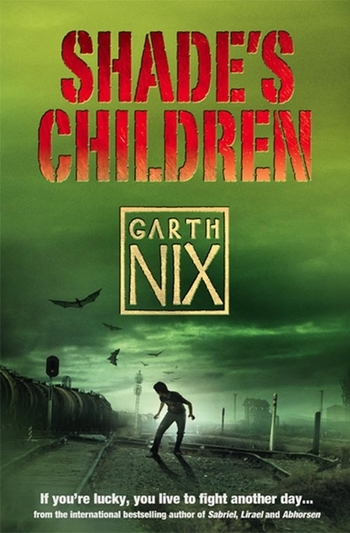 In the third of Garth Nix's books, 20 Minutes into the Future society has been toppled by an event called the Change, when everyone over the age of 14 suddenly disappeared. The remaining children have been rounded up and sent to prison camps called the Dormitories, where they wait in fear for their 14th birthday (referred to as a Sad Birthday), when the Overlords come to take them away, cut open their bodies and use their organs - especially brains - to build Creatures in the Meat Factory, which are then used in battles between the Overlords. However, some children manage to escape the Dormitories, evade the clutches of the Trackers, Wingers, Ferrets, Myrmidons, Myrmidon Masters, and the Overlords and find a safe refuge in an underground submarine controlled by an entity know as Shade, who appears to be the very last adult alive...for a given value of "alive". Some of these children have developed supernatural powers, known as Change Talents, as a side effect of whatever caused the Change.

Gold-Eye, who escaped and has been on the run, is rescued by one of Shade's Teams, which consists of his future teammates - Ella, Drum, and Ninde. Now the escapee children must come up with a plan to defeat the Overlords and return the world to as it was prior to the Change.