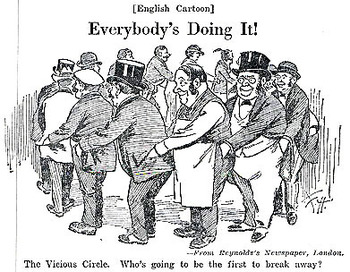 "They voted for the impossible, and the disastrous possible happened instead."
— History lesson (talking about us), Robert A. Heinlein, Starship Troopers

The appeal to popularity is built around the belief that something is true (or false) because a lot of people believe it is. This is fallacious because it confuses whether an idea is justified with whether it is accepted. Demonstrating widespread support for something only proves it is popular, not that it is true or false.

Alice: Don't you know smoking's bad for you, Bob?
Bob: Bah, it's just propaganda. If it were really bad for you, why would millions of people do it, hm?

This is the standard version; the belief that a large group is incapable of being incorrect. The fallacy can also be inverted, however, with popularity being taken as a sign something is wrong:

Bob: Alice, what's that terrible noise coming out of your speakers? I thought you liked The Band.
Alice: Geez, get with the times! The Band sucked since they sold out and went mainstream.

The latter logic is referred to as the "Appeal to Minority," and it underlies the phenomenon of It's Popular, Now It Sucks!, often used with regard to "edgy" and unconventional media. This also often plays a role in the so-called "Galileo Gambit" or "Galileo Fallacy", which refers to Galileo Galilei's famous persecution for his championing of heliocentrism which challenged the scientific consensus' acceptance of geocentricism, the then-held majority belief in Europe. At the center of this fallacy is the assumption that if the establishment or mainstream opinion find an unpopular belief or a theory ridiculous or even offensive, then that belief or theory must be unfairly persecuted and therefore correct. But the matter of fact is that there is no necessary link between being perceived as wrong and actually being correct; if people perceive something to be wrong, there is always a fair chance that it is wrong. As Carl Sagan once put it:

"The fact that some geniuses were laughed at does not imply that all who are laughed at are geniuses. They laughed at Columbusnote Ironically, this itself is an example of the Appeal to Popularity. While the belief that Columbus was fighting against a flat Earth majority is popular even today, the reality was that the Earth's sphere shape was a well known fact in Europe at the time. Columbus' actual opposition was the (correct) belief that the distance he had to sail was so great that he would never make it to Asia. It's only luck that they found another continent and weren't killed by starvation., they laughed at Fulton, they laughed at the Wright brothers. But they also laughed at Bozo the Clown."

The "silent majority" argument combines this with Begging the Question, since the lack of existence of popular support is held to show something is so popular nobody bothers to openly declare support for it rather than so unpopular nobody supports it at all.

These concepts, like economical value, linguistic meaning, or etiquette, are things that only exist because a large number of us believe that they exist. While it is objectively the case that gold has certain physical properties that give it useful applications in, say, electronics, if everyone collectively decided that it was worthless anyway, its value would indeed disappear (this happens at the beginning of the novel Galapagos). It's also happened somewhat already in the world, as gold is no longer used for currency much.