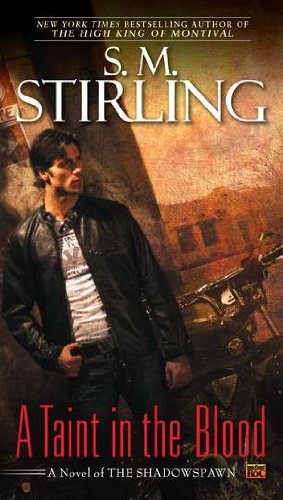 The Shadowspawn is a Gothic Punk Urban Fantasy trilogy by S.M. Stirling, set in a world where the Shadowspawn, a vampire-like Mage Species, secretly rule the world. In many ways, the series is a sort of Spiritual Successor to Jack Williamson's Darker Than You Think, or at any rate heavily inspired by it—though with Stirling's familiar emphases. You Have Been Warned...

With three volumes published, the series, though ending on a cliffhanger, is by all accounts complete. They are:

The background: In ancient times, there existed a subspecies of humanity that, thanks to strange quantum-scale interactions, possessed essentially supernatural abilities. Since this humanity was also essentially autistic and sociopathic, psychologically resembling solitary predators much more than anatomically modern humans, they were defeated and exterminated by the team-working Homo sapiens, but not before there was some interbreeding between the species, producing human psychopaths as well as occasional mildly magic-using genetic reverts.

Fast-forward to the nineteenth century, when infant modern genetics rediscovered the admixture of the witch species, now dubbed the Shadowspawn, in the human race. A French nobleman and occultist, the Duke of Bealoup, then took it upon himself to sponsor a breeding program to isolate and refine the vampiric race. Within only a few generations, this produced a species of nigh-immortal, bloodthirsty sorcerers, who seized control of the US Federal Government at some point during or just after World War I, and most of Europe not long afterward. Simultaneously, various human and dissident vampire elements secretly organized an anti-conspiracy, the Brotherhood, to resist them.

By the present day, 20 Minutes into the Future, the main plotline commences, focusing on Adrian de Brezé, a pureblood Beauloup descendant and Reluctant Monster, and his girlfriend Ellen, who are tormented by his not-at-all-reluctantly monstrous sister Adrienne. Initially, Adrienne kidnaps Ellen to annoy and manipulate her brother, and he marshals his Brotherhood connections to help him free her; later, thanks to Adrienne's machinations, he becomes aware of the Shadowspawn plot to seize power openly and depopulate most of the world. Being a hero, he naturally sets about to do his best to prevent this, gathering additional allies along the way. Ironically, this is precisely what his sister wants, since she, despite being a senior Shadowspawn agent, doesn't want to destroy civilization—Just rule it forever. While Adrian and the Brotherhood bash heads with the master vampires on the Council of Shadows, she prepares her own plans to capitalize on the outcome and replace whoever turns out the victor as the supreme power in the supernatural underworld...

The Shadownspawn contains examples of: