Literature / The Shapes of Midnight 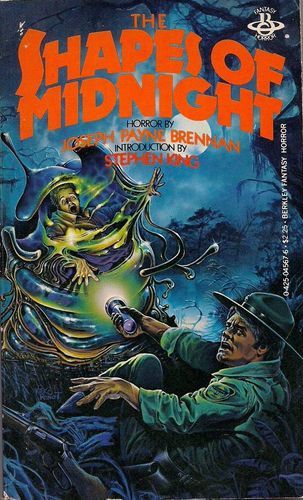 "Stay back! The shadow places shelter secrets that are best left undisturbed. Hear me! Or don't."
— Cover Blurb
Advertisement:

The Shapes of Midnight is Joseph Payne Brennan's short story collection published in 1980. It features twelve of his short stories - spanning Brennan's career from 1953 to 1973 - many of which had been previously published in Weird Tales, Brennan's own magazine Macabre and other anthologies. The book features an introduction by no less an authority than Stephen King and cover art by Kirk Reinert.

Long of print, it was republished by Dover in July, 2019. However, it omitted "Canavan's Back Yard" and "Slime" because of their earlier inclusion in Nine Horrors and a Dream (which Dover also reprinted). The Stephen King introduction was also be left out of the Dover reissue, making the original 80s paperback worth obtaining despite the reprint.

Makeup artist and voice actor Edward E. French has done excellent adaptations of four of the stories from the book, which can be found here: "Diary of a Werewolf

," "The Corpse of Charlie Rull

The Shapes of Midnight contains examples of:

"This is his book. Dare you make it yours?"