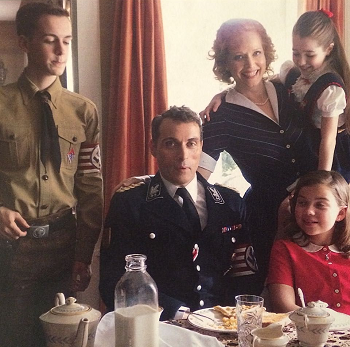 Some villains have standards. They might have no problem gunning cops down in cold blood, but they aren't going to do anything to children or women. Or they might be willing to blow up a city for a holy cause, but not for money. Somewhere they have to draw the line—because, if that line doesn't exist, good and evil cease to have any meaning at all.

And for a handful of villains, that line is, "Anything the Brady kids learned An Aesop about." Yes, these are bad guys who believe in good old-fashioned family values. Being a kingpin in the international drug trade might be fine, but giving alcohol to minors, most certainly not! It's their duty as a loyal citizen to show respect and admiration for the local police, but nothing says they can't do that and bribe the cops into murdering their enemies. And, of course, sexual intercourse outside of a traditional, heterosexual marriage (especially if it's not done with the intention of baby-making) is strictly prohibited.

Not all examples of this trope are as self-contradictory as the ones above, though. In some cases, promoting family values may be the reason the villain is doing all these horrible things, making them a Knight Templar. And in other cases, the family (wo)man routine might simply be an act, designed to ensure that they remain a Villain with Good Publicity. A third case might be that they display acute symptoms of Moral Myopia, putting "family" and "everyone else" into two completely different categories as far as the standards of moral behavior are concerned.

But then again, some just don't seem to see anything odd about speaking an arcane ritual to summon horrific demons into the mortal plane, then lecture some kids about saying "darn" instead of "damn".note Granted, it could be because they know a thing or two about damnation firsthand and are insulted to hear those young whippersnappers refer to it so triflingly…

Compare Straight Edge Evil, Evil Virtues, Family Man, and Churchgoing Villain. Contrast with Values Dissonance, where an ostensibly family-friendly character can unintentionally appear villainous to some. (For example, a man who forbids his wife to work outside the home, explaining that it's to protect her, or because as her husband he's supposed to be the breadwinner, might come off as sexist and emotionally abusive to certain audiences, whereas he might come off as a very loving and dutiful husband to others.) Almost always certain to be Affably Evil. Occasionally overlaps with Heteronormative Crusader, New Media Are Evil, Marital Rape License, and Honor-Related Abuse. See also The War on Straw.