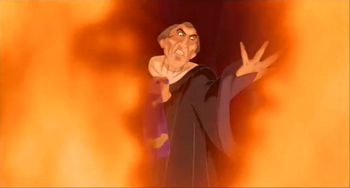 Destroy Esmeralda
And let her taste the fires of hell,
Or else let her be mine and mine alone!
Advertisement:

Maybe it's the connection the Bible makes between fire and punishment. Maybe it's just that flickering, destructive flames work so well to signify a dangerous, unstable mind. Whatever the case, fire is often used as a motif in fiction for religious fanatics and extremists. It's pretty common to see such a character preaching in front of bonfires or braziers, or, in more extreme cases, burning sacrifices alive.

Often overlaps with Evil Is Burning Hot, Hellfire, Burn the Witch!, and Light Is Not Good (particularly if the fire itself is divine, though even normal fire emits light). Compare Sacred Flames.