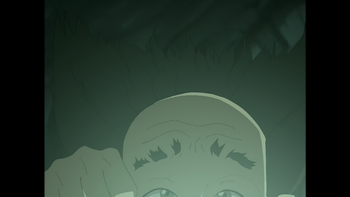 "Nearly blew myself and the whole place sky high!"
"Am I missing... an eyebrow?"
— Adam Savage, MythBusters (he was)
Advertisement:

Whenever fire or explosions are involved, the first thing to go is inevitably the eyebrows. This is nearly always Played for Laughs. This is usually a good way to have people hit by fire come away without true injuries in comedic works.

In Real Life, eyebrows do get singed off fairly readily in the case of flame, due to being fairly prominent on the face and thinner than normal hair. However, singed eyebrows may accompany more serious burns as well, so Don't Try This at Home.