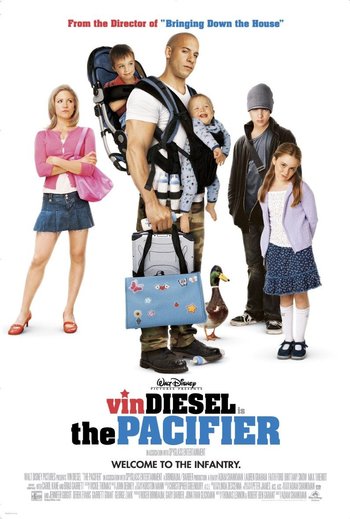 Duty calls! Prepare for bottle!
The Pacifier is a 2005 Disney live-action comedy starring Vin Diesel (in his first family comedy) and directed by Adam Shankman about a Navy Seal who is sent to babysit five obnoxious kids while their mother goes to Switzerland. What could possibly go wrong?
Advertisement:

After a rescue mission to save government scientist Howard Plummer ends with the scientist dead and Navy SEAL Lt. Shane Wolfe (Diesel) in the hospital, Shane is sent to protect the deceased scientist's family while their mother Julie (Faith Ford) and Shane's superior Captain Bill Fawcett (Chris Potter) go to Zurich, Switzerland, to retrieve a deposit box her husband had left there. Initially, the five kids, Alpha Bitch wannabe Zoe (Brittany Snow), rebel without a cause Seth (Max Thieriot), Firefly Scout Lulu (Morgan York), toddler Peter, and baby Tyler, cannot stand their new guardian and do everything they can think of to get him out. In response, Shane treats the family to some military style discipline.

Things aren't much better at school. While Principal Claire Fletcher (Lauren Graham) allows him to be there to protect the kids, Vice Principal Dwayne Murney (Brad Garrett)— who actively dislikes Seth, particularly when he keeps ditching the wrestling team (which Murney also coaches) — is a totally different matter. As Shane tries to deal with these issues and come to some sort of agreeable arrangement with the kids, he tries to find the missing satellite program, all while dealing with a pair of masked ninjas who are looking for the same.

They get word that their mother cannot get the box until she can supply the correct password, so she ends up staying for a lot longer. As time goes on, Shane finds himself warming up to the kids, and the feelings are eventually reciprocated. In the end, Shane becomes a surrogate father to the kids, and, with their help, he saves their father's research from falling into enemy hands.