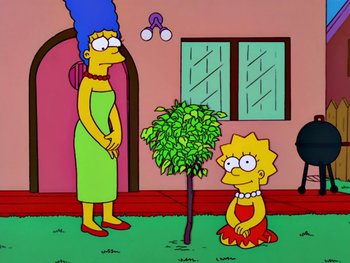 Lisa abandons her Christian faith (after the local church sells ad space inside of it to cover the damages done by Homer and Bart's toy rocket) and opts for a new one that still allows her to be closer to God, Buddhism. When word gets around, Marge tries to win her back to Christianity, but Lisa refuses.