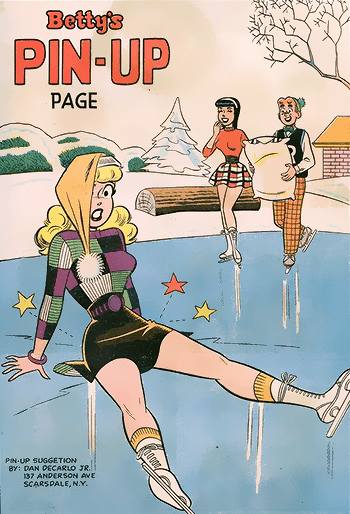 Many works of fiction are set in the right place and right time for it to be cold enough to experience snow, and for lakes, ponds and the like to freeze over. There are also those stories set in and/or near ice-skating rinks. Naturally, either way, one character or another will want to try to ice-skate on such a frozen body—or not, but is peer-pressured into doing so.

Fairly straightforward, until the character takes their first step onto the ice.

Expect a lot of imbalance, flailing, failing, struggling, shaking, frustration, hilarity and inevitable crashing. It very often ends up with an Epic Fail.

Note that, despite the name, the character does not have to be ice skating. It happens just as often with roller-skates.

When two are involved, it can become a case of Literally Falling in Love.

Compare Epic Fail, Jump Rope Blunders, and Frictionless Ice, as well as the Slippy-Slidey Ice World, where your Player Character is the one liable to have this trope. Contrast On Ice.

Tigger tries ice skating, but isn't that much skilled.

Tigger tries ice skating, but isn't that much skilled.