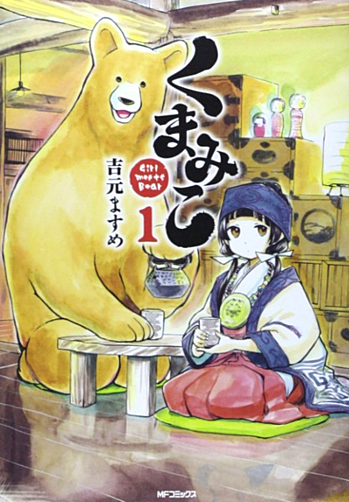 Two Childhood Friends. Nothing out of the ordinary here.
Advertisement:

Kuma Miko: Girl Meets Bear (くまみこ Girl meets Bear) is a rural Slice of Life comedy written and drawn by Masume Yoshimoto. The manga has been serialized since 2013 in the seinen magazine Monthly Comic Flapper. An anime adaptation by Kinema Citrus aired during the Spring 2016 Anime season.

Deep in the mountains of Tohoku, 14-year-old Machi Amayadori serves as the miko of her town, a role that the women of her family had held for generations. Natsu, her Childhood Friend is... a bear. A very well-informed and cosmopolitan talking bear (thanks to the free Wi-Fi in the village), but a bear nonetheless. Together, the two of them help preserve their town's traditions, but Machi finds her life there backwards and boring.

As a result, she wants to eventually move to the city to study, but Natsu is of the opinion that Machi is woefully unprepared for city life. Still, he wants to support her as much as he could, so he gives her small "tests", to see if she's really ready to live on her own in the big city. All Machi needs to do now is pass Natsu's tests to his satisfaction. Simple, right?