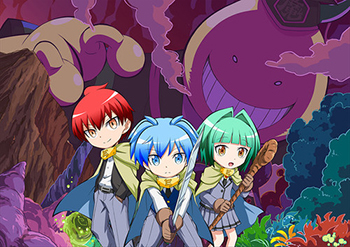 The manga is authored by Kizuku Watanabe and Jou Aoto, and is being serialized in Saikyou Jump.

It received an anime film adaptation (also animated by Lerche) as a companion for the Assassination Classroom: 365 Days compilation film, which premiered in Japan on November 19, 2016. Shortly after, an anime web series sequel was announced, consisting of 12 10-minute episodes. Crunchyroll is streaming the series, while Funimation is providing an English Dub on their website.

Due to some things differing from the original source, any character tropes applied in Koro-Sensei Quest! should be pointed here instead of the original series' character sheets.